Showing a rainbow of colors when viewed from multiple angles, shimmering and beautiful. Think of an opal, but way brighter. And with explosions. 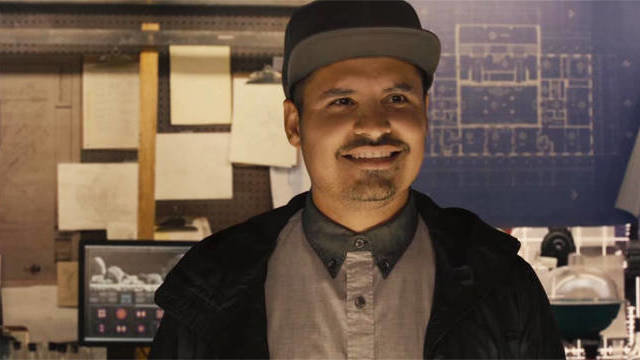 My favorite character in the MCU is not a superhero. Michael Peña’s Luis has been the best part of two Ant-Man movies now, his infectious joy leaping off the screen from the moment the he started his first monologue:

Luis is an extreme, but he is also an emblem. Marvel’s movies have been distinctively joyful from the start. Maybe that was something we should’ve expected when they started with the quippy Tony Stark, but the joy has carried through movies built around heroes like Thor and even Captain America. This is a large part of why Marvel movies have been so successful, of course: they’re a good time. When you plop down in a theater chair, you have a good sense of what to expect, and it’s going to be popcorn.

The best example of this is the Guardians of the Galaxy series. When the first movie hit its title sequence (after an unusually dark cold open), the theater had a semi-shocked laughter as Peter Quill lip-synced and danced his way to a treasure, goofing around in the ruins of an alien temple. (Of course, the more famous dance sequence came at the end of the movie with Baby Groot. Or Quill with Ronan. There’s a lot of dancing, just like in Footloose.) Guardians, as envisioned by James Gunn, was a playground for slightly deranged, sometimes macabre humor. This series has set up a joke about a prosthetic leg, hit it again both later in that film and in a sequel, and had two sequences where characters electrocute, shoot, or otherwise kill other pirates set to oddly happy music choices. And oddly, they’ve managed to maintain the tone so that the jokes land instead of misfiring.

Marvel’s humor isn’t always that irreverent, but it’s usually knowing. Think of how the repetition of Doctor Strange’s “Dormammu, I’ve come to bargain…and he’s dead.” sequence played out. Or how The Mandarin reveal in Iron Man 3 subverts the entire movie, turning it in both on itself and its main character. (Come at me. I will have none of this Iron Man 3 slander, and I will gladly buy you a drink to tell you why it works so well as a movie.) Thor is at the center of a couple such moments: the hallway scene in Thor: The Dark World, the “lifting the hammer” scene in Avengers: Age of Ultron, and the ultra-giffable “YES!” moment from Thor: Ragnarok. That movie, the only good Thor movie, gets both the humor and the spectacle right, just as Guardians did. I mean, look at this image:

This is what comic book movies excel at: exuberant spectacle.

Thor: Ragnarok came later in the Marvel canon, after Marvel had gotten comfortable taking risks in its imagery and humor. Even before this, though, they shot the action sequences with glee. Remember that Iron Man clip from yesterday where Tony Stark discovers he can fly? Shortly after that, Tony decides to take his new suit for a spin:

Marvel has always given us movies with a spark of fun and excitement, often with a couple sequences that make us wonder. From the start of Tony Stark’s arc, buried in a cave and beginning work on the arc reactor and Mark I suit, to the moment when Carol Danvers realizes her full powers and glances back to the two Kree ships next to the one she just wrecked, Marvel’s movies give us something to remember.

My favorite small moment in a Marvel movie is this one:

There is no real reason to toss ’n’ catch a knife like that in the middle of a fight. The hand-to-hand combat is propulsive enough on its own. But that unnecessary detail has ended up being the moment I remember from The Winter Solider, even over Captain America’s elevator battle (the series’ best fight sequence).

The action sequences from the Marvel movies—the best ones, at least—tend to be both character-driven and less about the hyper-tight choreography than “How about THAT?” The Black Panther ending battle resolves the three major tensions from the film and clarifies relationships. Ant-Man’s finale plays out on two levels, the heroes fighting for control of the technology while Scott Lang tries to protect his family. The famous Hulkbuster fight from Avengers: Age of Ultron has real stakes in it, as Tony Stark attempts to stop his rampaging, mind-controlled friend.

The piece-de-resistance, though, is the airport battle. Fifteen minutes long, but it feels remarkably nimble. Full of characters, but never overstuffed. Perfectly choreographed, with each character fighting in their own unique way and strength, with character groupings that both make sense and give each one time to make comments. This is everything comic book fans dreamed about seeing on the big screen. And you know what? This non-comic book fan had a blast watching it.

No discussion of Marvel’s joyful approach to movies would be complete without talking about The Avengers. The Avengers is a party of a film. It takes time to get underway, but everything comes together in a truly great movie climax. We all remember it. For me, it was the most fun I’ve ever had in a theater. I never heard the Hulk say “puny god” because the crowd was laughing and cheering so loud. The Battle of New York was both the climax of the film but also of many movies of plotting and character development. From the interviews and oral histories of the shoot, it was clear that everyone involved knew something special was happening. It shows.

I’m trying hard to not make this a Marvel-vs.-DC thing or a Marvel-does-no-wrong thing, but it’s worth reflecting on how the DC movies have changed. They started out hard on the anti-hero, grim dark path, then realized that the public wanted heroes and abruptly changed course. The recent efforts have been good but stick closely to the formula Marvel honed. Wonder Woman, Aquaman, and Shazam! were all clearly made with love and joy. Just five years before that, DC was betting on serious, gloomy superheroes being what people wanted, a residue from the Christopher Nolan Batman trilogy and ending age of antihero. They were wrong—badly—and had to adjust.

Marvel is not perfect, but they make fun movies lovingly. We all respond to that. I’m not sure there’s a Marvel movie that doesn’t have at least one memorable scene (except for you, Ed Norton). Marvel made their movies by showing how much fun they had making them. It doesn’t seem odd to us now, but it was a significant difference from what had happened before. I’m not sure how well this sets up Marvel for the future—there will inevitably be a course-correction, and Logan may be the harbinger of that—but it’s been a blast to be along for the ride. Now if you’ll excuse me, I have a universe-saving dance-off to organize.